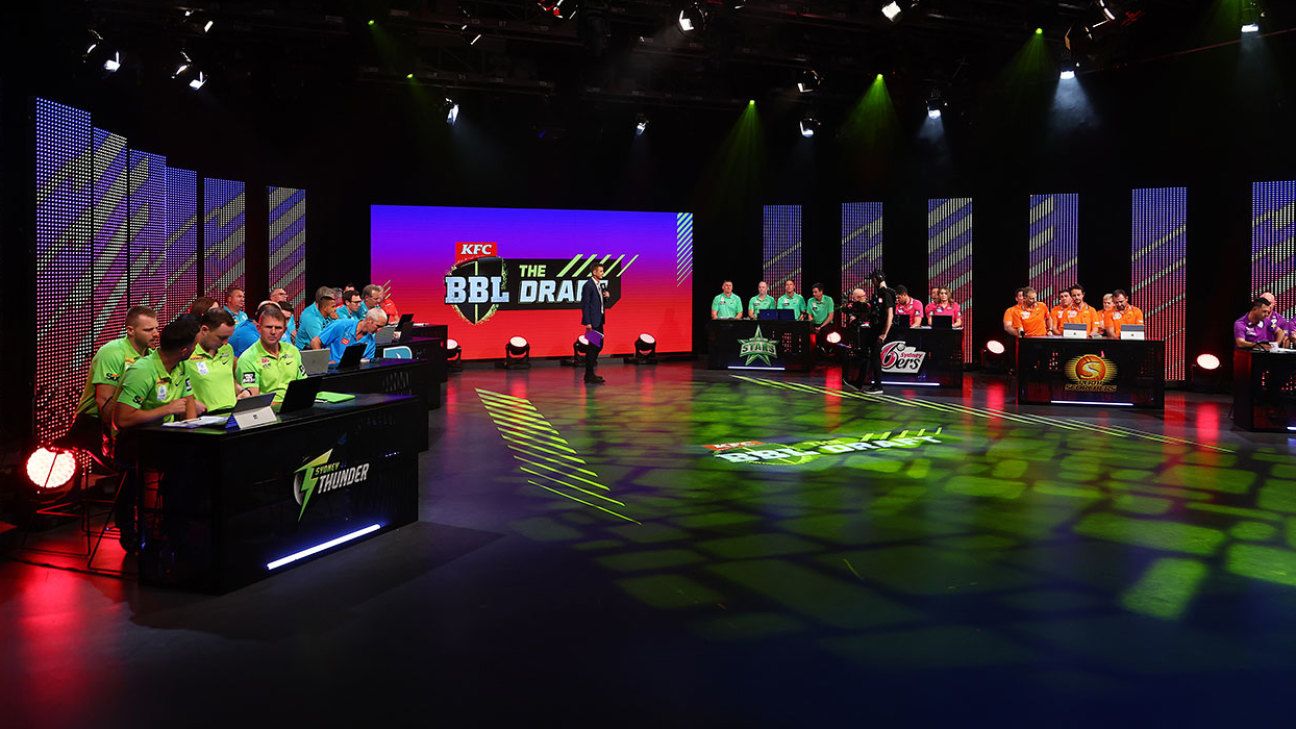 The least surprising move on draft night was Strikers using their retention card for Rashid Khan when Melbourne Stars made a bid for him. They expect to get about eight games from Rashid before he heads to South Africa for the new T20 league there.

However, things got interesting after Rashid was held on to. Colin de Grandhomme’s name took everyone by surprise, not because he isn’t a fine cricketer, but because his name wasn’t on the lists released earlier in the week. ESPNcricinfo understands that he had nominated in time, but his paperwork took a bit longer to work its way through. There remains some uncertainty over his availability.

Adam Hose, the 29-year-old English batter, was their final selection, on the weight of some outstanding domestic numbers: Hose made 557 runs at 55.70 and a strike rate of 160.98 in this year’s T20 Blast and is also having a strong Hundred season for Northern Superchargers. He also has full availability, which added to his value and other teams were also interested in him.

On the move: Sam Billings will swap Sydney Thunder for Brisbane Heat•Getty Images

A solid evening’s work from Heat. Sam Billings will bring quality to the middle order – and is a superb outfielder – before leaving for the UAE in January, after Sydney Thunder opted not to use their retention option.

They were also able to keep hold of Colin Munro, who could have gone back to Perth Scorchers. Currently, Munro is listed as having full availability, but he does have a deal with Desert Vipers in the ILT20.

Ross Whiteley, the 33-year-old English batter, is the more left-field selection but the powerful left-hander has solid T20 pedigree, though he had a lean T20 Blast for Hampshire this season. He will likely be used as a finisher.

With Usman Khawaja and Marnus Labuschagne available after the Tests there is some quality batting to return for the backend.

There will be a strong Pakistan contingent at Hobart Hurricanes•PCB

This was fascinating from Ricky Ponting. Hurricanes have brought in three Pakistan players with the hope they will have extensive availability.

Shadab, who was their platinum pick, fills a clear hole they had in the spin department [although they may still need more cover] and Asif Ali has been picked with a specific middle-order role in mind behind the likes of Ben McDermott, Matthew Wade and D’Arcy Short. He has an overall T20 strike rate of 147.85, which goes up to 158.80 at No. 5. Both could be involved in some white-ball cricket against New Zealand, but Ponting expected them to be around most of the BBL.

Faheem Ashraf is in the curious position of having lost his PCB contract but still being in the frame for the Test side, which is in action during December. Hurricanes still have five slots left for domestic players.

They had the first pick and went with Liam Livingstone, who will bring some star quality to the middle order, although he may have to adjust to the trickier surfaces at Marvel Stadium. Where he bats remains to be seen, but top four would appear a certainty.

Elsewhere, there was a strong spin focus with Renegades’ home conditions in mind. Heat decided against retaining Mujeeb Ur Rahman, who is as valuable for his economy as his wicket-taking, and he found a new home in Melbourne.

Akeal Hosein, the West Indies left-arm spinner who has a T20 economy rate of 6.44, was their final name and, with him and Mujeeb having ILT20 deals, it means Renegades will lose all three signings during the season. They also have plenty of room left in their 18-player squad, and are currently light on pace bowling.

Stars were quick to go for Trent Boult after the expected retention of Rashid by Strikers and he should make a big impression with the new ball before heading to the UAE.

After that, they delved into the English game. It had been widely expected that they would go for Joe Clarke again, because he offered them the wicketkeeping option they needed in the squad and has full availability. He made a very strong impression with the club last season amid the Covid chaos.

Luke Wood, the Lancashire seamer, offers another left-arm option with full availability. David Hussey knows him from his days at Nottinghamshire. He was selected in England’s ODI squad for the Netherlands series earlier this year.

They were tipped to skip platinum and did just that despite David Willey’s availability. They used their retention option to keep Laurie Evans, who played the match-winning innings of last year’s final, after Sydney Sixers picked him, with his full availability a huge factor.

Phil Salt, who has previously played for Strikers and is also likely to be around most of the tournament, although he may be on England duty at the backend, has been drafted in. But Scorchers will now get Cameron Green after the Tests.

Left-armer Tymal Mills, another Scorchers player from last season, adds an edge to the bowling attack if he can stay fit. Their list is complete except for any replacements. They will hope to see plenty of Josh Inglis, Mitchell Marsh and Jhye Richardson, now that expanded Test squads aren’t required.

James Vince will again line up for Sydney Sixers, but only for part of the tournament•Getty Images

Two very expected names and a bit of a bolter.

Sixers know what they get from Chris Jordan and James Vince and very much like it, despite their limited availability. Jordan forms a strong line-up of quicks alongside Sean Abbott, Jackson Bird, Ben Dwarshuis and last year’s breakout star Hayden Kerr. Vince can resume his opening pairing with Josh Philippe until January.

The left-field pick was young Afghanistan spinner Izharulhaq Naveed, who coach Greg Shipperd appeared very excited about. Nathan Lyon will return after the Tests and there remains hope that Steven Smith could still join him despite declining an initial offer.

This feels like a very strong draft from Thunder.

They have a versatile allrounder in David Willey, who is available all tournament, the power and known quality of Alex Hales for a decent chunk, and the left-handed Rilee Rossouw to slot into the middle order before the South Africa league.

Losing both Hales and Rossouw will make batting replacements key, but David Warner will come in at the top for the last five regular season matches. Could probably do with some more pace options.

Andrew McGlashan is a deputy editor at ESPNcricinfo