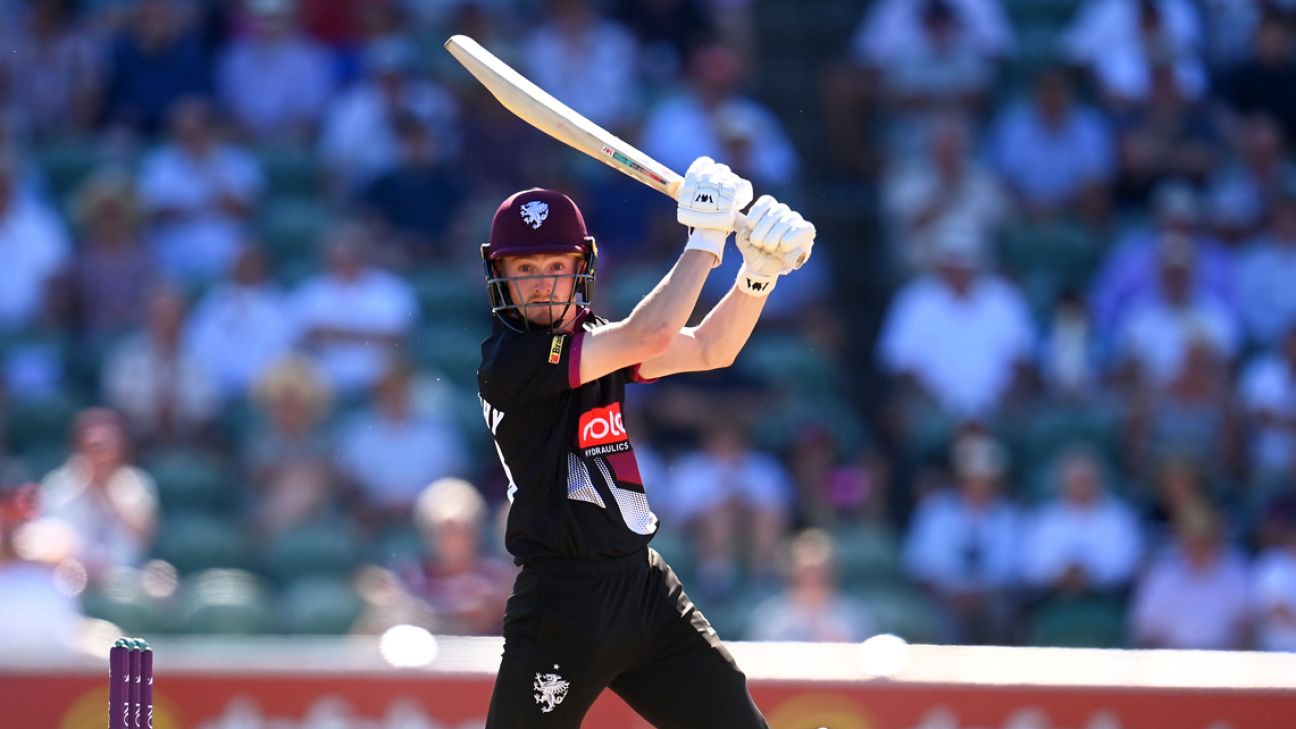 Somerset collected their first Royal London Cup win at the eighth and last attempt and dragged Warwickshire out of the competition in the process with a 14-run victory at Edgbaston.

Lewis Goldsworthy‘s maiden List A century (111, 116 balls) and Jack Brooks’ excellent bowling (four for 38) underpinned a win which brought some belated light to a leaden campaign.
Somerset owed their total to a third-wicket stand of 198 in 35 overs between Goldsworthy and James Rew (96, 120). Olly Hannon-Dalby and Liam Norwell took two wickets apiece but George Garrett impressed most, conceding 37 from his ten overs.

Warwickshire knew that reaching 267 would take them through to the knockout phase but their depleted batting order, without the injured Krunal Pandya and Michael Burgess, fell just short on 252 all out. Captain Will Rhodes (92, 103) and Ethan Brookes (51, 57) added 104 in 18 overs for the fifth wicket but there were no contributions of substance either side of their stand.

After choosing to bat, Somerset soon lost former Warwickshire opener Andy Umeed, bowled by Norwell who also had Steven Davies superbly caught low at slip by Rob Yates. With three vital championship games to come in September, the Bears will be encouraged to see Norwell starting to regain full fitness and menace.

Rew and Goldsworthy rebuilt, slowly at first, then more fluently, reaching their half-centuries from 77 and 71 balls respectively. The latter struck 12 fours in a polished innings before falling lbw to Yates.

Eighteen-year-old Rew was a boundary short of his second List A ton when he sliced Hannon-Dalby to short third man. George Bartlett’s tidy unbeaten 29 (21 balls) lifted Somerset to a competitive score.

Yates (four fours and a six in 25) gave Warwickshire’s reply a brisk start until he was brilliantly caught at extra cover by Bartlett off Kasey Aldridge.
A string of batters then also picked out fielders. Bartlett pounced again at extra when Dom Sibley (23, 36 balls) lifted a drive at Brooks and Goldsworthy added wickets to his earlier runs as Hamza Shaikh swept to deep mid-wicket and Matt Lamb cut to point.

That was 95 for four but as Rhodes and Brookes’ enterprising batting righted the ship and got the crowd involved. Brookes twice located the Hollies Stand on his way to a 53-ball half-century before edging Brooks to wicketkeeper Davies.

Brooks’ then pinned Kai Smith lbw with a yorker to send Warwickshire into the last five overs needing another 42. Denied the required boundaries by disciplined, full-length bowling, they entered the final over requiring 21. That was well beyond the tail and they accompany their opponents out of the tournament.