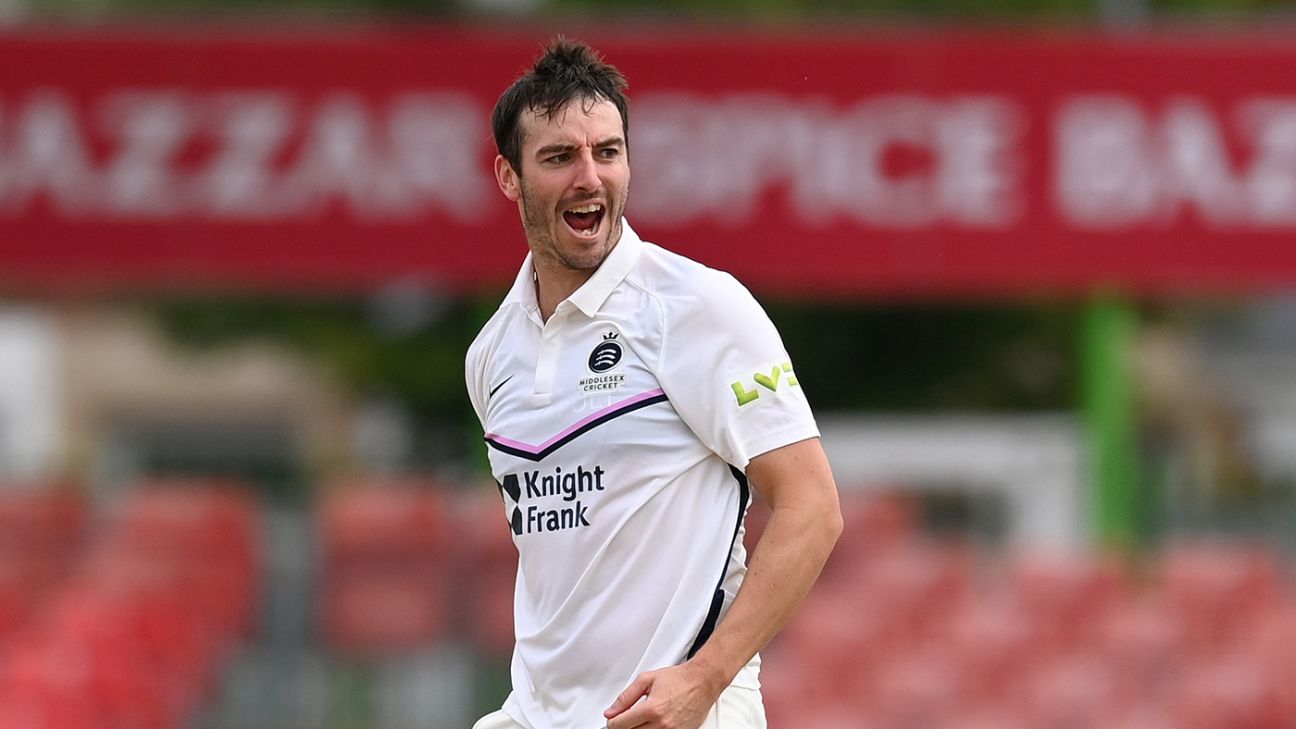 Middlesex have put themselves within sight of a victory that will put them squarely in contention for the Division Two title after Leicestershire’s fragile batting undid their good work with the ball on day three of their LV= Insurance County Championship match.

Skipper Callum Parkinson took 4 for 69 and young legspinner Rehan Ahmed a career-best 3 for 50 as Middlesex collapsed from 209 for 3 to 271 all out in their second innings, losing their last seven wickets for 62 after Mark Stoneman (81) and Max Holden (91) had put on 165 for the fourth wicket.

It left Leicestershire with a fourth-innings target of 275 to record their first win of the season. Instead they are in deep trouble at 13 for 4 going into the final day.

After leaders Nottinghamshire’s heavy defeat at Worcester, a win here would take Middlesex into the final round of matches next week in second place just nine points behind. Middlesex face Worcestershire at New Road, with Nottinghamshire at home to Durham.

Leicestershire had achieved their first objective for the day by finishing just three behind on first innings after Ed Barnes and Chris Wright added 21 runs to their overnight total.

Toby Roland-Jones prised out the last wicket when Barnes top-edged a pull to be caught behind for a best-of-season 46, the Middlesex seamer improving his figures to 4 for 66 and 59 first-class wickets for the season. Another five will match his career-best tally of 64 in 2012.

Leicestershire were in the ascendancy as Middlesex’s nascent second innings lost three wickets in the first 10 overs, mainly as a consequence of Parkinson’s bold decision to give his own left-arm spin a try with the new ball just five overs old.

By then, Middlesex had already lost Sam Robson to a fine catch at second slip by Colin Ackermann off Michael Finan. Parkinson struck with his seventh ball as Steven Eskinazi’s paddle-sweep looped to short leg.

When he made one bounce and turn to have a groping Pieter Malan caught at slip in his next over, Middlesex were 44 for 3, just 47 runs in front.

But as Stoneman and Holden set their minds to scoring quickly in the hope of taking the game away from their opponents, Leicestershire’s front-line seamers found it hard to apply the brake. By lunch, Middlesex were 108 for 3, 111 in front.

The fourth-wicket pair added 50 in 10 overs and maintained that rate of scoring, Holden reaching his personal half-century off 48 balls, Stoneman his off 74.

Parkinson almost had Stoneman on 51 with a difficult chance to short leg at 139 for 3, but the pitch was becoming increasingly unresponsive and Middlesex were now in control of their destiny.

By tea, their lead had been extended to 247, although the session had also seen Leicestershire fight back with three wickets.

Holden, often easy on the eye as he gathered 13 boundaries, departed on 91 after uncharacteristically poking at a wide ball from Tom Scriven outside off stump, caught behind by a diving Harry Swindells.

Stoneman went to sweep Louis Kimber, thus far an occasional off-spinner, but missed and was bowled behind his legs for 81. When Ryan Higgins was bowled by Ahmed, failing to pick the youngster’s googly, Leicestershire felt they were back in the game, in theory at least.

Indeed, the momentum stayed with them after tea as Middlesex’s collapse accelerated, their last four wickets tumbling for nine runs as John Simpson, sweeping, was bowled by one from Parkinson that turned back a long way and Luke Hollman heaved a horribly mistimed pull straight to mid-on.

Parkinson picked up his fourth wicket when another super delivery, perhaps his best of the day, beat Ethan Bamber’s push forward to clip off stump, before a Roland-Jones miscue to long-on gave Ahmed his third.

It left Leicestershire to chase 275 to win, not the most forbidding target but a formidable one for a team of their thin resources. If they could have found a way through the last 16 overs of the day without mishap, they might have given themselves a chance.

Instead, Tim Murtagh dismissed Sam Evans leg before with his second ball, Sol Budinger, off the mark with a thick outside edge for four, was bowled off an inside edge by Roland-Jones, who then saw off Kimber, bowled by a full delivery and Ahmed, dragging on one to his leg stump, leaving them 13 for 4 inside the first six.