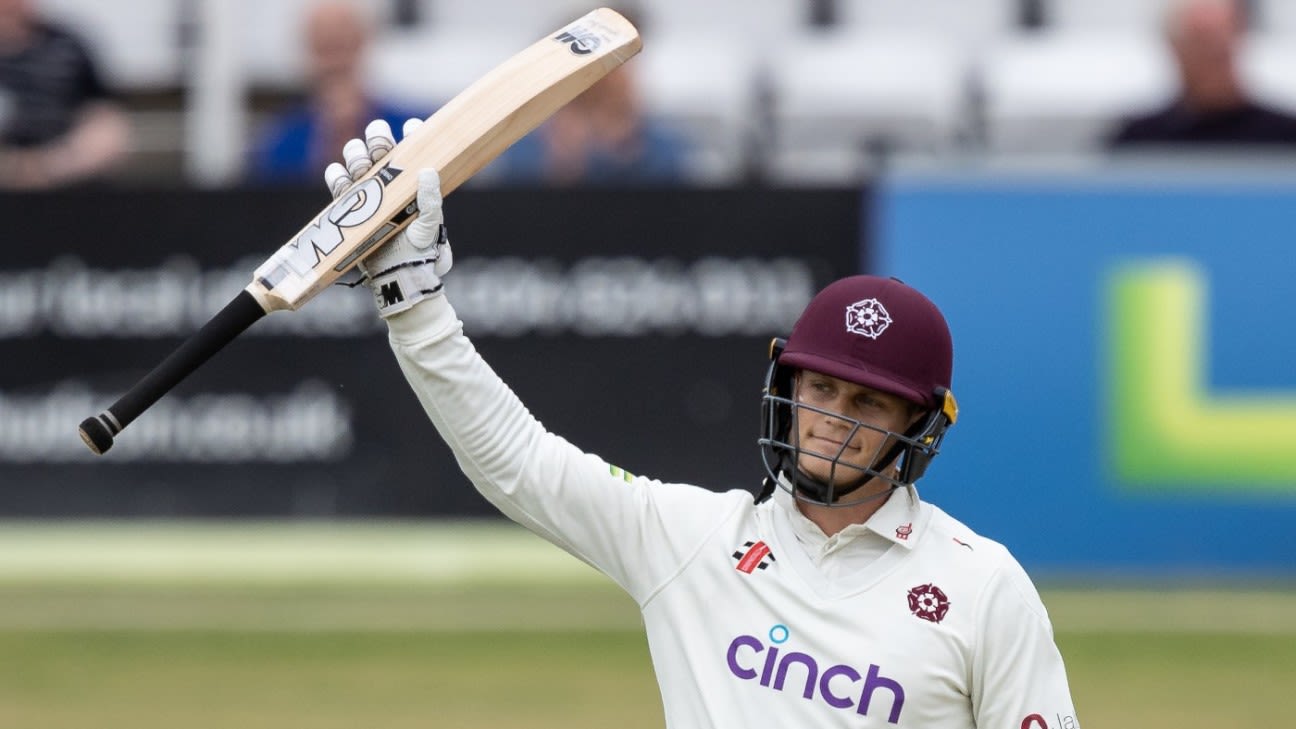 Ryan Rickelton fell five short of a century as Northamptonshire built a first-innings lead over Gloucestershire on the second day of the LV= Insurance County Championship match at Cheltenham College.

The 26-year-old member of South Africa’s Test squad, already with two Championship hundreds under his belt in his first three games for Northants, hit 13 fours and a six in helping them post 353 for seven in reply to Gloucestershire’s 317.

Overcast conditions offered encouragement to the home seam attack when Northants began the day on 30 without loss.

With 16 runs added, Emilio Gay pushed half forward to a delivery from David Payne and fell lbw for 15.

But that was as good as it got for Gloucestershire as Young and Rickelton settled in to enjoy full value for their shots on the parched College Ground outfield.

There were plenty of sweetly-timed drives from both Test players, Young moving to a 109-ball half-century with a straight six off Zafar.

The New Zealander had also struck 10 crisp fours and it was a major surprise when he fell just before lunch, caught behind pushing forward to Zafar with the score on 132.

Three runs were added before lunch was taken at 135 for two, from 40 overs, with Rickelton unbeaten on 42.

The in-form left-hander went to fifty off 90 balls, with eight fours, at the start of the afternoon session and celebrated by sweeping a six over deep square off Zafar.

It proved a frustrating session for Gloucestershire’s bowlers. Procter had to battle for his runs and on 32 edged Ryan Higgins between wicketkeeper James Bracey and a wide first slip.

Rickelton was given a life on 88, driving a wide ball from Higgins to short cover where Miles Hammond spilled a chance he would have expected to take.

It looked likely to prove an expensive miss when the century stand between Rickelton and Procter was brought up in 34.3 overs.

But, with his score on 95 and the total 245, Rickelton got a touch to a leg side delivery from Zafar and Bracey took an excellent catch to his right standing up to the stumps.

Rickelton departed having taken his run tally in seven Championship innings for Northants to 471 at an average of 78.5.

Tea was taken immediately, with Northants 72 behind and still having seven wickets in hand. On the resumption, Procter reached his half-century, having faced 116 deliveries and hit 7 fours.

Tom Taylor could make only a single before falling leg before to Zafar to make it 257 for four. The second new ball was then taken and accounted for Rob Keogh, caught and bowled by Zak Chappell off a leading edge for 13.

Gloucestershire looked back in the game when Procter was bowled by Tom Price to end a 170-ball innings featuring 10 fours, with Northants still 18 runs behind.

But Lewis McManus put the visitors in front with a glorious cover driven four off Price and then swept Zafar for six on his return to the attack.

With a fourth batting point in the bag, McManus became Zafar’s fourth victim, bowled sweeping for a useful 29. James Sales was unbeaten on 21 at stumps, with his side 36 runs ahead.