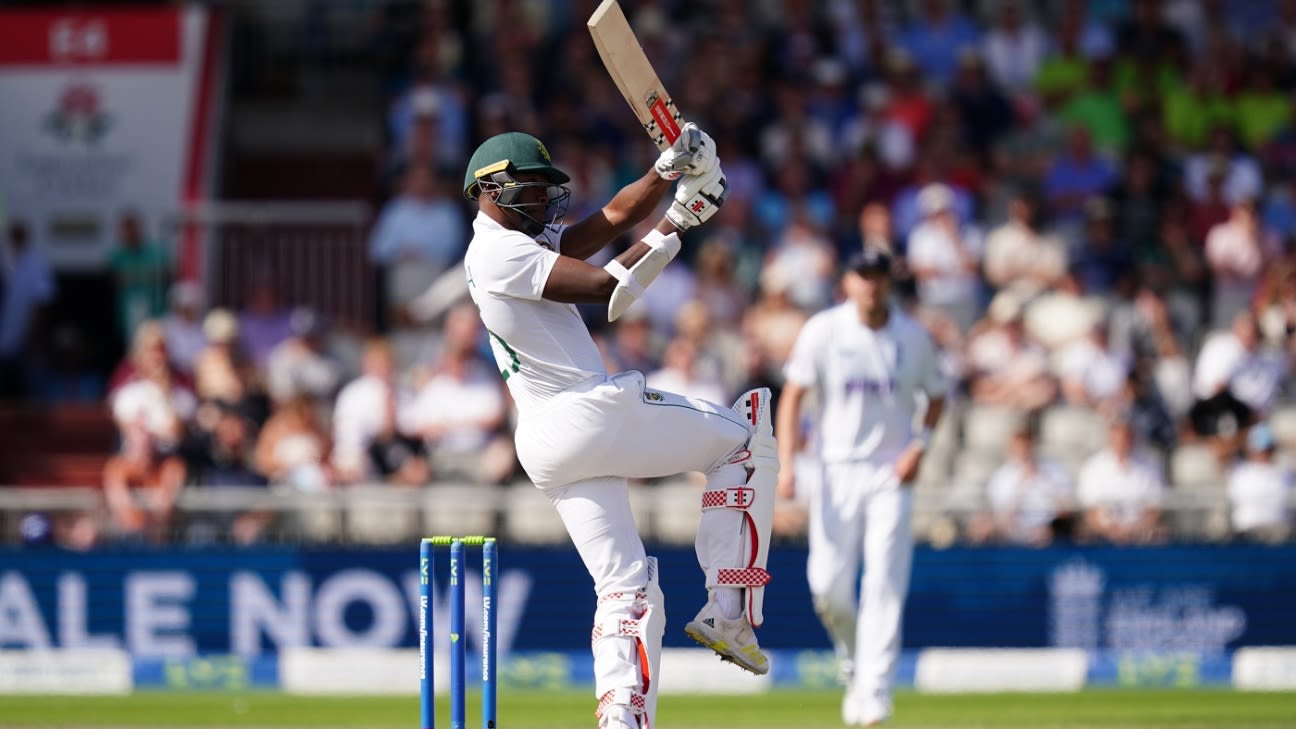 Kagiso Rabada has defended Dean Elgar’s decision to bat first in bowler-friendly conditions at Old Trafford, citing team selection as the reason for the approach.

South Africa were shot out for 151, and Rabada, batting at No.9, was the top-scorer with 36 and shared in the highest-stand – 35 for the ninth-wicket with Anrich Nortje. Despite England trailing by only 40 runs at the close, with seven wickets in hand, Rabada maintained that Elgar made the correct call.

“Generally, if you’re playing two spinners, then you’re going to bat first,” Rabada said. “As you’ve seen the wicket is getting drier and drier by the second. It’s day one and it’s really dry and it’s quite slow. Simon was in the game. His second ball ragged quite a bit. So I think it was the right decision (to bat first).”

When asked if he would have preferred to get first use of the movement on offer and a pitch with substantial bounce, Rabada stuck to the team’s line that the surface is rapidly ragging. “We played two spinners for a reason, knowing it can get quite dry out there. It is what it is.”

Old Trafford is not necessarily known for being particularly spinner-friendly. Since 2018, spinners’ strike-rates at the ground have been the third-worst among venues in England at 74 balls, or a wicket every 12.2 overs. South Africa may have been swayed by the small sample size of matches Harmer has played at the ground: three. He has taken 15 wickets at 17.60, and last played here in May, where his match-haul of 6 for 114 bowled Essex to an innings win over Lancashire.
To make room for Harmer, South Africa benched Marco Jansen, despite his four wickets and a score of 48 with the bat at Lord’s. Rabada has some empathy for his fellow fast bowler, but threw his support behind Harmer.

“The selection issues: we had to play two spinners,” Rabada said. “But Marco is an exciting talent. He can bat. We’ve seen what he can do with the ball. He has got a lot of x-factor. Unfortunately he had to miss out. That was a team decision. It wasn’t based on his performance.

“Simon is a top quality bowler, especially in the County Championship. He has proven that. If you had to look at the (Marco’s) replacement, it’s not a bad one. Marco has got a long career ahead of him and he is going to play a lot more games. He wouldn’t mind the rest. He is going to be playing a lot more over the years.”